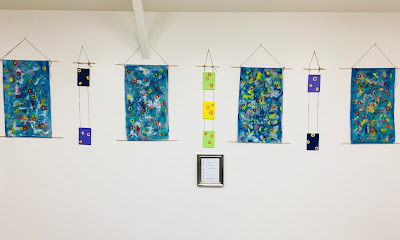 North Fork Arts Projects is delighted to feature Cristina Querrer. She was born and raised in the Philippines, post-Vietnam War, during the Marcos regime, pre-Mount Pinatubo eruption, as a U.S. Air Force military child. She graduated high school from former Wagner High School, Clark Air Force Base, Philippines in 1985. Her works have appeared in various literary journals and anthologies. She has two books of poetry, By Astrolabes & Constellations and The Art of Exporting. She is a U.S. Army veteran, holds an MFA in Creative Writing, and is a writer, artist, and podcaster. 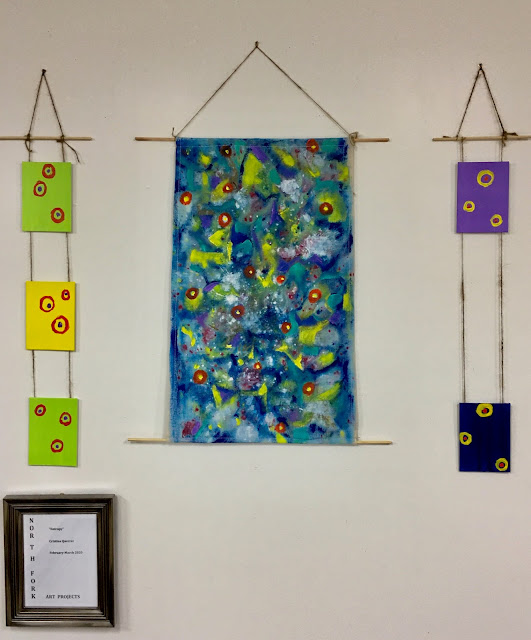 I create visual art, music, and literature and within these art forms I explore methods and boundaries.  I love the intersections between art forms, crossing disciplines, as one discipline influences the other.

In my recent painting series, I entitled “Entropy”, I explored variations of frame and presentation by not utilizing the traditional museum canvas.  These pieces are mixed media with more earthy textures and linear materials such as untreated raw canvas hung up with wooden dowels and twine.  The colors, however, are comprised mostly of bright prime colors and the technique employed is the diffusion of colors to create a gravitationally bound galaxy or celestial bodies.


(Close-ups from Left to Right) 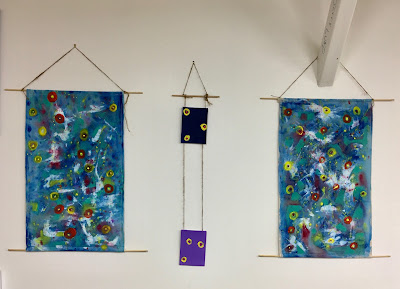 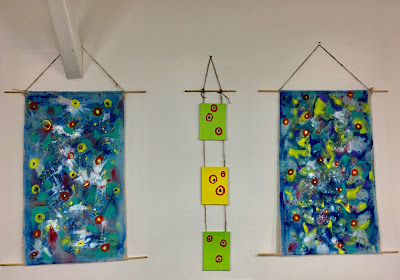 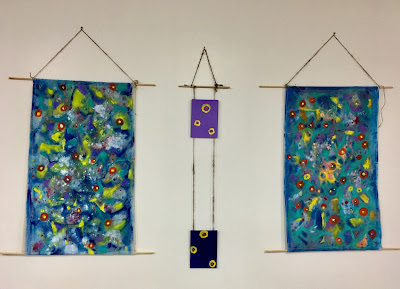 I have always been fascinated by the photographs and images of space: constellations, distant planets, and universes and even the randomness of chaos.  These are the themes that also reappear in my writings including the lyrics of my songs.

Other visual art: Silvery Twines, Embracing series was featured in Empty Mirror.
Poetry: “By Astrolabes & Constellations” and other online works.
Music:  “Show Me”

I am drawn to the metaphysical—things that cannot be readily explained by science. I feel the secrets of the universe works in such elusive ways.  I am a great proponent to physics which seeks to explain our natural world and our universe, don't get be wrong!  However, no matter how much we try to make sense of it all, it is like an old ancient knowing: that those who have insight to this "secret" have a more window view to the soul of things.  It is no wonder I am attracted to stories that are filled with magical realism.  As a Filipino American that grew up in the Philippines, I grew up with the fantastical stories of spirits and ancestors imparting to us their ancient wisdom.

Here are some writing that might further implicate the theory—poems in my poetry collection, "By Astrolabes & Constellations":

Just in case the leaves turn color
before my words unfold the awful truth
of how a bitter fruit was once
sweet in our mouths while exchanging
deserts for fertile forests,
algebraic equations for no absolution.

Just in case the world turns
against us, or was it ever there
for us? Yes, indeed I say—
it was always there— all-encompassing
joys and sorrows that crowd our hearts
so much that we could not prepare
for chances, we vacillate
in between set measures.

Just in case I lost interest—
will I ever? But in case I lose
my sight, my hearing,
or all my mobility,
jot it down, right here, right now—
that we were here in earth’s bed,
mellifluous, silvery twines, embracing.

But for the experience
I will purchase shells
that I can pick myself for far less,
to gladly have you guide me into shops
to touch the textures of your canvas,
your fabrics, barter with you for your smile.

You have unknowingly woven yourself
in and out of me. Taken aback
by your sudden outburst in libraries
or in quiet halls, I feel at times at lost
in your ulterior fringes. I am wanting
the calyx of your throat
describe to me your oceans,
your terrain of meanings,
hoping to live in translation.

Verbalize in your language,
in your tonality, express to me
what it means in your country
to engulf a wonder, suddenly with no time
to digest it fully.

But the sweet taste of it
will forever linger on your palette
and shall fiercely crave it again
so that you would risk your life
to cross the Rio Grande
from suppressed verbs,
or on a crowded vessel
on top of musty bodies
floating fearlessly to autonomy.

Right now,
I tell you what it means in mine:
It means my heart yearns
to be elliptical as the planet in orb,
suspended by the myths of allegiances.
Though, where I live is not
without aberration or without

spurious dictators that seek
to damper my escape,
but I found equanimity
in other words,
I could not find within mine.

My music lyrics I wrote and song with Tampa Bay producer Gooze B can be heard HERE:

It seems to me that love never stays
Whatever happened to my yesterdays?
Don’t want to play these games no more
One foot in and out the door.

Rap
I will show you if you want me to
I will take you by the hand
But you must understand
I’ve been hurt in the past
So I have to add
Now would you be true
No one but me & you
Cause honey, I can be you love receptacle
The only thing is I’m a bit skeptical
So let’s go ahead & start this thing brand new
So I can show all the love I can have for you

Conversation with Eileen Tabios:
ET: In “Entropy,” I really appreciate how you interrogate framing—the normative framing of works—as well as how you mix the twine with images that evoke outer space. The earthiness of the brown twine with its sometimes unraveling pieces contrast both visually and texturally with galactic scenery—it’s a combination that grounds one on earth even as one looks out towards the “heavens” (which, for me, also hearkens Filipino novelist N.V.M. Gonzalez's mythologizing of the indigenous human who, by being rooted onto the planet but also touching the sky, means the human is rooted to the past and future as well as the present). It also bespeaks a restlessness that can be seen in how you work in more than one genre or form. Please share something about your background.

CQ: I have been a visual artist technically since the late 90s—the same time frame I deemed myself a writer and poet, creating, publishing, and exhibiting.  I lived in an artist co-op in Connecticut where you had to legitimately be a working artist in order to live there. It was the most fruitful time for me because I was surrounded by like-minded folks with whom I created and collaborated.  It was where my artist career was established and where I started building strong artist communities that has lasted through the years.
I call myself interdisciplinary and multidisciplinary at the same time.  I say multidisciplinary because I create in many art forms, sometimes in tandem, and I say interdisciplinary because one art form can inform or influence another.

ET: How do you differentiate between your art forms?

CQ: I believe creating in each art form is specific to the genre.  It's just another form of expression.  I learn the techniques in each genre in order to successfully express my thoughts and emotions.  It will be just as compelling in its prospective capacity to the reader, the viewer and the spectator in which they experience these expressions.

Music and dance, however, were my earliest expressions of evolutionary development for me. Before I could put words or images onto paper and intellectualize them, there were a voice and body I could project to express or evoke emotion readily.

ET: Thank you for creating a special installation for North Fork Arts Projects. I want to share an image of some of your older works in our collection as I believe the discerning viewer can see relationships among the works, and how your concern and interest in color and galaxies have been consistent. Thanks Cristina! 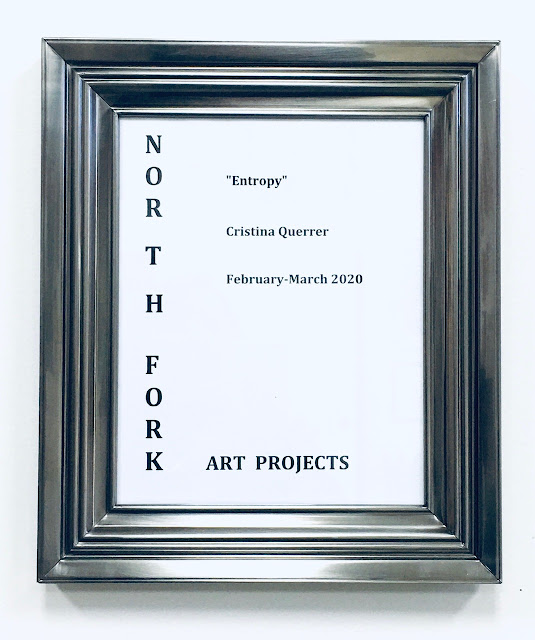 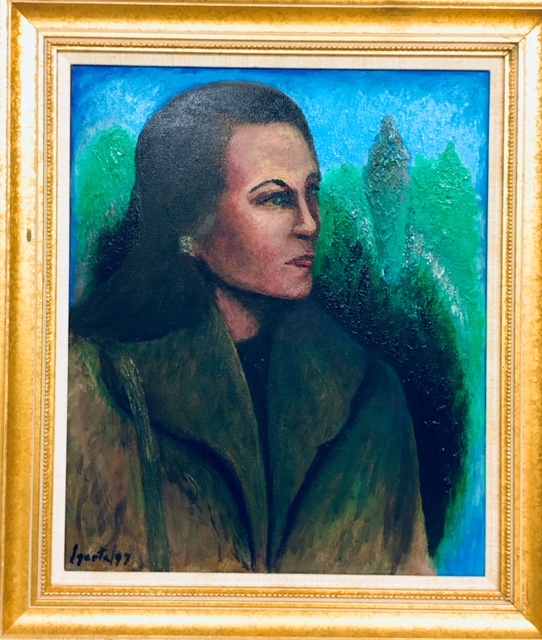